I had managed to get used to an independent and beautiful life, but I had no clear plan how to continue and from what to make money. But as they say, when God closes a one door, He opens another one.

After a few weeks, I happened to be involved in a conversation and my friend told me he goes to work in the evenings. I asked him where he works. He replied:

"I work as a sales representative for Clalit Health Fund. We go door to door in the evenings and offer people to join as a subscriber to Clalit."

I asked, "Is there money there? Do they pay well?"

He replied: "For every signed contract they payed $30. I close a contract or two in the evening. They are still recruiting sales representatives. If you want, come with us." 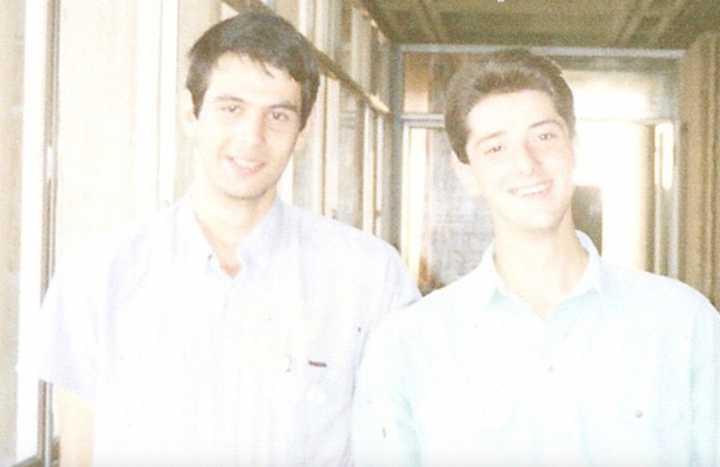 Bachelor's degree program from Ben Gurion University.
In the evening I went hunting, from door to door!
In the evening a minibus picked us up. I go up and see another 8 people sitting there. They brought us to a new neighborhood in Be'er Sheva. We were dropped off in the center of the neighborhood and were told: "Everyone gets one building. Here are contracts. Here the customer needs to sign. The goal is to transfer people from another health fund to a general health fund. That's it. Go to work."

What?! Is that the whole explanation ?! I thought they would teach me, send me to courses, how to talk to customers, how to sell to them, and only then they would tell me, "Here's the contracts, go work."

Ok. That's what's there. We'll try. Let's start and see how it goes. If others can, I probably can too.

I walked over to the building allotted to me. I look at it, but my head was empty of thoughts. Where to start? Which apartment? What if they send me to ...? What shall I say then? Scary...

I knocked on the first door. A woman opened up to me and asked, "What do you want?". I do not know what to answer her, but probably at that moment the genetics of commerce in me was activated :) With a business perspective I look at the contracts, and then asked her:

- When was the last time you visited there?

- Are you satisfied with the service you received?

- No, not at all, they spoke to me badly and rudely.

She decided that I was doing a survey on Maccabi's HMO. Here all my commercial genetics woke up :) And I said to her with a smile: "That's exactly what I wanted to talk to you about. Can I come in?"

She let me in the house! I told her about Clalit's excellent service and how good it would be. I told her she's not losing anything because she can try - the first two months for free. If she doesn't not like it - she can cancel at any time.

She signed the contract!!!

The victory was stronger than 5 orgasms together!

Until we talked, until we signed a contract - an hour or an hour and a half passed. But we only have 2-3 hours of work, because we arrived at the building at 8 in the evening, when people are already at home and we are only allowed to work until 10-11 at night - no more, because people are already going to sleep during those hours and can not be disturbed.

I left there completely happy, inspired by the success, sure I found a gold mine with a secret formula. I knocked on the second door. An old man opened the door for me and I asked him: "Which health fund do you subscribe to?"

He said, "What do you care where I subscribe?"

I got stuck. I did not know what to answer him. And ... he slammed a door in my face.

I stood for about 10 seconds in deep silence and then returned to the minibus - it was time to leave.

All the way home I thought not of the old man, but of the woman. I was trying to figure out what caused the success - after all, if you managed to do it once, then there must be a way to do it again!

It is best to look for the reasons for success rather than the reasons for failure. Even one small victory already proves you are doing the right thing. Now, you only need to understand how the formula works.
In the morning, instead of going to a university lecture, I went to a bookstore and bought a book on Zig Ziegler's art of sale, "Bargaining Secrets." Within a few days I finished the book and next time "I went hunting" I was ready to storm the building.

Despite all my attempts, that evening, out of the six apartments that I moved through, I was unable to close any deal. But the next day I closed 3 deals in one evening!

For a whole month I went from door to door and managed to close 42 deals. At the end of the month I received $1200!

I was full of admiration! In the jewelry repairs I did not sleep at night, I sweated every Friday and Saturday and earned $700 - $800 a month, and now, only three hours in the evening and I almost doubled my income!

I decided to take the subject seriously. Every day I improved the script of the conversation and gradually brought the art of selling to such a level that I would close a contract within 20 minutes. I learned to get people to open doors. I learned to sell through closed doors. I learned to close 6-7 deals every evening.

There was one piece of advice from the book helped me do all this, but I'll tell you about it a little later.

I neglected my studies in favor of sales. I did not wait for the minibus. I drove to the buildings myself. I chose which buildings to enter and went on sale not at 8pm but at 4pm. Other sales agents did not object because I did not sell in areas where they had already worked. I was looking for new neighborhoods - it turned out that there were plenty of them all over Be'er Sheva.

To remind you, this is the year 1996 and it was good money for a young student. For $500, it was possible to live for a month as the king of the dormitories. I could invite a girl to a restaurant, buy her presents, take a taxi to university, buy books, bring a bouquet of a hundred roses to my mother for her birthday.

One evening as I left the dormitory to go hunting, a car stopped next to me and the man from the car turned to me and said: "Sit down, let's talk."

- Tell me how you do it? How do you close so many deals? People do not close as much in a week as you close in one evening!

I had read it in Zig Ziegler's book and loved the approach so much that I still use it in all my sales.

Do not be ashamed to sell. If you are selling a good and necessary product, then you are not fooling the customer, but giving them an opportunity to improve their life. Your main task is to explain to the customer that with your product their life will be much better. You have their product, and they have your money.
He looked at me in silence for a few seconds and then said, "How about you start working for us full time."

I replied, "I would happily agree, but I'm studying at university. I have two more years to study. True, I'm bored at university, but I promised my parents I'm going to finish my degree. Sorry."

We parted as friends and it was a friendship that lasted for many years.

I worked at Clalit for another six months, amassed a good fortune and left. Why did I leave? Because it really started to bother me in school. I neglected the studies so much that I thought I would be expelled from the university. I did not want to drop out of school - it allowed for a few more years to enjoy the free and beautiful life of the student.

What’s more, I left because I was exhausted. Door-to-door sales - it's not something easy. It's exhausting. Besides, I do not like routine. I do not like to do the same thing day after day. I do not like when a creative process becomes routine actions.

Clalit sales were one of the most fundamental cornerstones of success. I can say I learned the art of sale here. The hardest sales are door to door sales. All other methods, compared to this method - child's play.

The door is opened for you and you have a few seconds until you are sent to hell. Sometimes the people do not open the door at all and you have to force them to open the door and trust you. It's a huge strain, but it's the most effective way to learn how to sell.

Today many are trying to learn sales, sitting in classrooms or stuck on YouTube, listening to smart lectures. But the real sales are made there - on the ground, face to face with the customer. There are no theories that impart this experience in sales.

Today, many entrepreneurs build websites and landing pages, hide behind a beautiful and polished advertising text, talk about lead generation processes, marketing funnels, advertising strategies and think the money will flow to them like a river. But for some reason the money does not move towards the bank account ...

To make money, you must first sell to people face to face, and only then, when you gain the experience and know exactly what your customers want and how to talk to them - you should advertise the product on the site and build landing pages. Then there will be both sales and money.
Add Comment
« prev   (1...)   3  4  5   (...26)    next »