As I invested and traveled around the world, new students continued to enroll in the Start-Up course and start businesses. The advertising worked on autopilot, people bought the course themselves, learned on their own, set up businesses themselves, sent feedback themselves - the whole system worked like a Swiss watch mechanism.

The results, of course, made me happy, but the Start-Up course became a soulless system for the birth of entrepreneurs. I was not there. My heart was not there.

I wanted a closer relationship with the students. In recent years I have gained so much knowledge and experience, that it was about to blow me up from within. I wanted to share it with my students. But I did not intend to give my knowledge to just anyone. I wanted to see in person who came to study.

At that time I had more than 5,000 students. But I wanted to be helpful to those who really wanted to learn from me. The highest quality students.

Of course, I could just write "Come learn from me and I will personally accompany you" and there would be a queue. But I decided to choose from 5,000 students only those who really wanted to be with me, to learn the principles of true success and to run with them.

I wrote a letter and sent it to all my students:

"Dear student! I would like to give you a special offer:

If you have already started your business, but for some reason you are stuck and do not know how to proceed - I am ready to help you personally start a business and earn the first $30,000.

But I will take for myself the money we will earn, as payment for the advice. You will have a working business and all future income.

The process will take between one month and one year.

If you are interested - sign up for the first meeting, where you will receive all the answers."

Less than an hour had passed since the publication and the negative reviews had already started arriving: "You have to be an idiot to agree to these terms!" "Why do you have to pay so much for the advice?" "Where is the guarantee that you will not take my business?", "I have already paid for the Start-Up course. Why do I need your help?" and so on.

Bingo! The goal had been achieved! I wanted to create negative resistance and I was able to do it!

Yes, I understand that sounds illogical, but I will explain everything. I already knew, not from the rumors, but from my own experience, that skepticism, anger and a negative attitude - are an excellent filter for filtering unsuitable people.

Anyone who "turned off" his mind and succumbed to social anger - evaporated as in the wind. Very few remained, who activated their head, assessed the situation and realized they had a chance to take off.

Anyone who wanted to get to the first meeting, had to sign up and wait a month. 63 people signed up for the meeting.

The waiting period turned out to be another filter - those who hurried and did not want to wait - regretted and left. This is how I got rid of all the impatient people , who are sure the whole world revolved around them.

A month later we gathered in a large hall in Tel Aviv. When I entered the hall, all the registrants were already sitting and waiting anxiously for what I was about to tell, so that they would earn the first $30,000.

The contract was very cruel. For example, one of the clauses stated that when signing the contract, I must be given a check for $30,000 - a guarantee that I will receive my money for the consultation.

Another section stated that if a student did not perform the tasks he received from me, he would still have to pay me for the counseling. I'm sure you can agree - the conditions were not very encouraging.

I left them the contract, took a half-hour break and left the hall. I did it on purpose, so that whoever was ashamed to leave in my presence, could escape quietly, when I was not there.

Usually in such situations, people are forced to sign a contract immediately so that they can not think about it too much. But I did not want to force anything on them. I wanted the decision of the remaining students to be considerate and safe.

After that I answered all their questions, told them how the consultation would take place and the next meeting was scheduled for another month. That ended the first meeting.

Why wait another month? I wanted all those who changed their minds or began to doubt their decision - to retire quietly.

To all those who even hinted that they were not happy with something - I returned the money and removed them from the list. There were only 3 such people. We had 35 people left.

A month later, as agreed, I flew to Israel and we met again in Tel Aviv. No one expected to get the surprise I prepared for them.

I brought all their signed contracts and all their checks and said, "Here are your contracts. I do not need them. You do not owe me anything. Here are your checks. I do not need them either. You thought Eli decided to make himself another million dollars, but I don't need it. I need you - pure, strong, and those who are really willing to learn from me. I will help you create your business for free."

People were in shock. When they realized what I had told them a moment ago, they began to clap. They approached me with a hug and many cried with joy.

The legendary meeting in Tel Aviv, where I gave a million dollars.

I got what I wanted. I formed a small group of 35 strong students who were willing to go on fire and water, to achieve success.

I gave a name to this group - the "Golden Club". I created for them a closed online club, in which we participated every day.

I led almost every hand and every student to success. Every day I gave tasks to each of the club members and also checked every day how they performed them.

Tasks were given every day. Each student had their own task, different from others - one wrote a promotional text for his product, another met with customers and made initial sales, others examined performance options of their idea, others increased sales, and so on.

I personally reviewed all the promotional texts that my students wrote for their clients. I personally helped edit correctly, to get better results. I listened to recordings of negotiations with clients and helped create call scripts for new and improved negotiations.

Repair, improvement and the next day again to the field. Fight and bring results. Every day. Every day.

Some progressed faster, some progressed more slowly, some did not keep up and preferred to give up. We plowed like slaves, I did not give anyone a break, but the main thing was that we achieved results.


The Golden Club was established in October 2012. Already in the first year, my students together earned more than $3,000,000.
When the other students, who once gave up the club, found out what happened and why the club was actually created, they really wanted to join us.

Not immediately, only a year later, I allowed them to be with us, but they, of course, were no longer part of this exciting story.

The Golden Club still exists. Hundreds of new students have joined us. We do the same thing as at the beginning of the journey - we help businesses form, grow, help solve problems, find new customers, create collaborations.

If you are lucky and can join our club, you can see and hear true success stories, get to know the true legends, communicate with them, learn from them and maybe even create a new business with them.

Entrepreneurs often get stuck in one place - they work non-stop, make an effort, sweat, but are still stuck in the same place. They do not know what they are doing wrong. No one will tell them that. They have no one to consult.

But one correct answer can take them out of bounds and give direction. That's what I give at the club. I personally answer all of my students' strategic questions and these answers save them months of searching.

One of the interesting features of the club is that when someone asks an interesting question - everyone sees the answer. Many club members do not even think about such questions, but they get answers every day that simplify their lives. 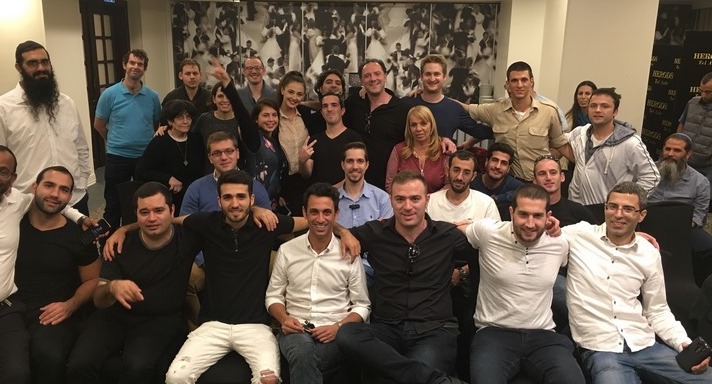